Home » About Us » Board of Directors » PAUL V. WILSON, BSc 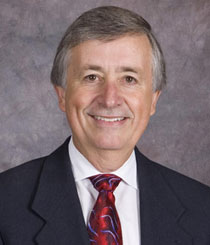 Mr. Paul Wilson is a member of the Board of Directors of Coril Holdings Ltd., and is also a Director of Loram Holdings Inc., Coril’s U.S. operating company based out of Minneapolis, Minnesota, focused on railway track maintenance and service. Paul’s multi-faceted career has included leadership positions for Epic Oil, and Alberta Gas Chemicals in places such as South Africa, Minnesota, New Jersey and Southern  Alberta. In 1989, after a successful engineering and management career outside the group, Mr. Wilson joined Coril’s sister company, the Loram Group of Companies, in Calgary, as Manager, Research and Environment.  Paul’s primary responsibilities were the preparation and development of research and environmental policies for the group of companies. He also served as an integral member of the evaluation team for selected new business opportunities. In 1992 Mr. Wilson returned to the United States to join Loram Maintenance of  Way, Inc. initially holding the position of  Manager, Business Development. He was later promoted to Vice President, International Business and was responsible for all business outside North America. In January 1997, Mr. Wilson’s strong leadership skills earned him the position of President and Chief Executive Officer of Loram Maintenance of  Way, Inc. and its subsidiaries.  Paul’s innate business acumen elevated Loram’s reputation to become one of the world’s leading Railway Maintenance and Service companies, strongly focused on safety.

In 2008 Mr. Wilson retired from the position of President and Chief Executive Officer of Loram Maintenance of  Way, Inc. and accepted the position of Managing Director, CXE International Bank Ltd., a Barbados based investment arm of Coril’s, which has since been dissolved.

Mr. Wilson was born and raised in Calgary, and holds a Bachelor of Science degree in Chemical Engineering from the University of Alberta.  Since retirement, Paul and his wife have enjoyed travelling and spending time with their children and grandchildren.