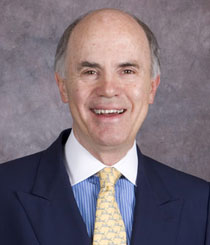 Mr. Thomas d’Aquino is an entrepreneur, lawyer, corporate director, author and educator. He is Chairman of Thomas d’Aquino Capital and Chairman and Chief Executive of Intercounsel Ltd, a private company that provides advice to chief executives and entrepreneurs in Canada, and internationally, on business strategy and public policy.

Mr. d’Aquino serves on the Board of CGI Group Inc., Coril Holdings Ltd., and is Chairman of the National Gallery of Canada Foundation.

He is associated with two of Canada’s leading academic institutions as Distinguished Visiting Professor, Global Business and Public Policy Strategies, at Carleton University’s Norman Paterson School of International Affairs; and as Honorary Professor at The University of Western Ontario’s Richard Ivey School of Business. Earlier in his career, he served as Special Assistant to the Prime Minister of Canada, and as Adjunct Professor of Law at the University of Ottawa lecturing on the law of international trade and global business transactions.

From 1981 to 2009, Mr. d’Aquino was Chief Executive and President of the Canadian Council of Chief Executives (CCCE), an organization comprised of chief executives from 150 of the country’s leading enterprises, as well as pre-eminent entrepreneurs. Mr. d’Aquino assumed leadership of the Council in its formative stages, and by the time he retired on December 31, 2009, member companies accounted for $850 billion in annual revenues and $4.5 trillion in assets. With a combined Canadian stock market value of $675 billion, the member companies are responsible for the majority of Canada’s private sector exports, investments and training. In recognition of his exemplary leadership, he was named a Distinguished Life Time Member by the CCCE Board of Directors.

Mr. d’Aquino has played an influential role in shaping the direction of fiscal, taxation, trade, energy, environmental, competitiveness and corporate governance policies in Canada. In the international arena, he has been a leading thinker and activist on a wide range of North American and global issues that embrace international finance, global security, as well as trade, energy, the environment, and competitiveness. As one of the private sector architects of the Canada-United States free trade initiative, and the North American Free Trade Agreement, he is currently helping spearhead private sector initiatives aimed at defining a new era in Canada-United States relations. He is active in negotiations aimed at deepening Canadian relations with China, India, Japan, Australia and the European Union, with projects that also include G20 related issues.